Company-wide expertise for Roth blow moulding facility in the US

Biedenkopf/Watertown. The Roth family company leveraged company-wide synergy effects to develop a new large blow moulding plant for plastic products at its production site in the US city of Watertown. The project brings together the manufacturer’s skills in two fields – hydraulics and plastics processing. The design of the hydraulic accumulators permits rapid plant movements, ample power reserves and huge energy savings, helping to preserve resources. 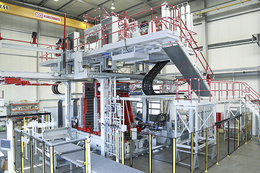 Roth boasts decades of experience in blow moulding products and incorporates this knowledge into the machinery it develops. Weighing in at some 125 tons and with a clamping force of roughly 300 ton, the blow moulding plant is equipped with three extruders. The production plant is also kitted out with three sensor-controlled Roth Hydraulics piston accumulator systems for various hydraulic applications in the production process. This is because hydraulic energy is required to open and close the nozzles, to extrude the plastic tube and for all movements that the blow moulding plant undertakes. The hydraulics facilitate movement in the plates, the two-part mould, the blow pin and blow needles for letting in air, the mould closing mechanism during the blow moulding process and the control of wall thickness in the plastic. Both halves of the mould can be moved separately, allowing them to move both in and out of synch and at different speeds. Cylinders fitted with locking devices at the four corners of each mould half regulate the clamping force. Clamping cylinders support the mould as it closes to a precise fit while withstanding blowing pressure of up to 6 bar. The mould itself weighs 15 tons (7.5 tons per half) and can open by up to 3 metres at a speed of 300 millimetres per second. Each piston accumulator system has a working pressure of 180 bar and a maximum pressure of 210 bar. Proportional valves control how the two mould halves close and how the plastic tube feeds into the blow mould.

Smaller environmental footprint thanks to hydraulic energy
John Pezzi, V.P. Operations at Roth North America, explained: “The piston accumulator systems have allowed us to reduce the electrical load of our hydraulics by around 75%. This covers the load from our pumps, motors and heat exchangers. Cutting energy consumption to a minimum improves our environmental footprint and helps to conserve resources.”

Customised piston accumulator systems
Roth Hydraulics piston accumulators for machinery and systems come in sizes ranging from 0.1 to 1,500 litres. Standard systems are available with a maximum operating pressure of 350 bar, while customised designs can handle up to 1,200 bar with variable pre-load pressure. These are used where power needs to be drawn in large quantities and with a high level of performance. Depending on their field of use, significant increases in capacity can be achieved by placing gas tanks downstream of the systems. Even compact, large-scale systems with a total volume of well over 100 cubic metres can be manufactured and supplied ready for connection – by coupling together any number of piston accumulators and downstream gas tanks. The accumulator systems are suitable for use in temperatures ranging from -10 to +80 degrees Celsius, with versions available that can handle larger extremes: as low as -60 °C and as high as +200 °C. Roth designs fluid connections and sealing systems for the piston accumulators to order based on its customers’ requirements. It is not possible for any gas to escape suddenly on the fluid side. Sealing systems that minimise friction guarantee a high degree of efficiency, including in operation. Optional add-ons such as an in-built stroke limiter and a wide range of measuring and monitoring devices give an indication of the system’s operating status and energy level. The piston accumulators can be installed anywhere.

Global leader in accumulator systems
With its new large blow moulding plant, Roth now has five production sites located throughout the world that use blow moulding processes to create plastic products. All of them are equipped with Roth Hydraulics piston accumulator systems. In addition to the two German manufacturing facilities in Dautphetal-Buchenau and Bischofswerda, there is also another in the Spanish city of Tudela and two more in the US – in Watertown and Syracuse. The manufacturer has the largest blow moulding plants in the world. Roth uses these to manufacture up to 10,000 litres of capacity. Matthias Donges, Chief Executive Officer (CEO) of Roth Industries, underlined: “The new blow moulding plant in the US is a great example of how synergy effects are being exploited right across the different divisions of our family company. Drawing on our expertise in hydraulics, plastics processing and machine engineering, we created a cutting-edge, highly efficient piece of manufacturing equipment.” With its energy storage systems, the Hessian family company is amongst the global market leaders, a position it is strengthening with its new production facility in Watertown. 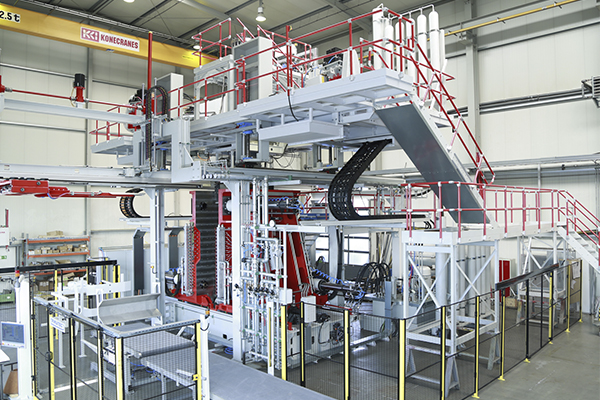 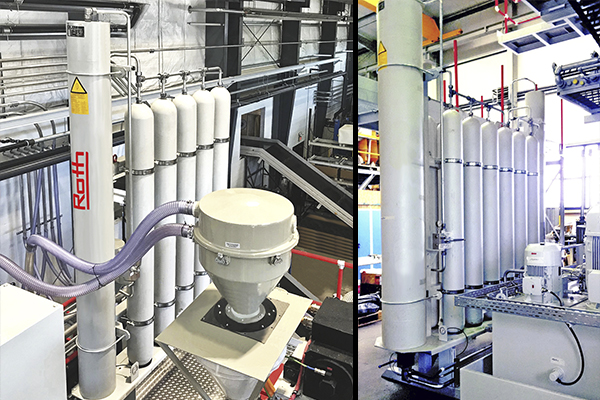