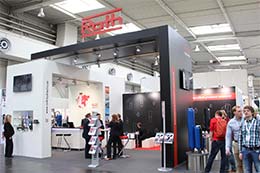 With its international certifications and locations in Germany, China and the USA, Roth Hydraulics will respond to customer requests flexibly and fast. Roth Hydraulics supplies Europe, Asia and America from these locations. Since October 2016, the company also has a sales office in Dubai, supplying the Middle East and North Africa – especially the oil and gas industry in this region. Roth accumulators may thus be used to supply so-called “blowout preventers”. These will reliably block a borehole in an emergency, preventing the escape of crude oil or petroleum gas and thereby significantly contributing to the protection of the environment. Frank Fuchs, Roth Hydraulics Managing Director, explains the company’s global orientation: “Thanks to our comprehensive product range, we are globally well positioned. We have pegged out our strategic course over the past two years by establishing agencies and production facilities in primary growth markets.”

USA – one of the largest hydraulics markets worldwide
Frank Fuchs emphasises: “The uniform presence of the Roth family-run company allows us to exploit sector-spanning synergies even better.” The USA offers one of the biggest markets for hydraulic accumulators, continues Frank Fuchs. In Syracuse, Roth Hydraulics is utilising existing facilities and infrastructure such as warehouses, administration and a production hall of the resident Roth Global Plastics, a company active in the building sector. Roth Hydraulics produces bladder accumulators here and markets piston and diaphragm accumulators produced in Germany. Local procurement of components simplifies logistics. The subsidiary also efficiently and on schedule supplies North America and Canada with Roth hydro accumulators. Roth Hydraulics is extending its customer relations from these locations to be better positioned to open up local markets. A distribution and dealer network is handling catalogue products. Services and delivery times are improved by being close to markets and customers.

The Roth Industries subsidiary has been operating under the name of Roth Hydraulics GmbH since May 2016. This company with its long tradition in the field of hydro accumulators has been part of the Roth Group since 1989 and thus also sports the logo of the parent company Roth Industries. Roth Hydraulics for the first time showcased its new and modern corporate presence at the Hanover Fair.